Many urbanites across the global auto markets find it very important to consider fuel efficiency and vehicle size when buying a car. Parking is tight and limited and the commute to work can be very long, increasing the cost of owning a car and compounding an individual's carbon footprint. The crowded urban environment must be balanced with the need for passenger and cargo space. For a large segment of the car buying public, the answer is a supermini car. These cars offer incredible km/l numbers as well as room for four to five passengers. Nearly every automaker offers a supermini. Global players like Honda, Hyundai, and Fiat often grab many of the headlines within the class, but Mazda and Toyota offer two of the most dependable and economical units within the supermini class.

The 2008 Mazda Demio and the 2008 Toyota Vitz are both well regarded by professional reviewers and the owner's who drive them daily. Each comfortably seats four adult passengers. A fifth passenger can be seated in either car, but the cabin becomes cramped, especially in the Demio. Both vehicles will deliver the fuel efficiency that discerning buyers demand from a supermini. From the outside, each has a proud stance that is much more refined and sporty than one may expect from a subcompact car. The Demio features a sleeker look than the Vitz; however, the Toyota Vitz has a lower drag coefficient for better aerodynamics and improved fuel efficiency. (you can read more about the Toyota Vitz at our Car Wiki). 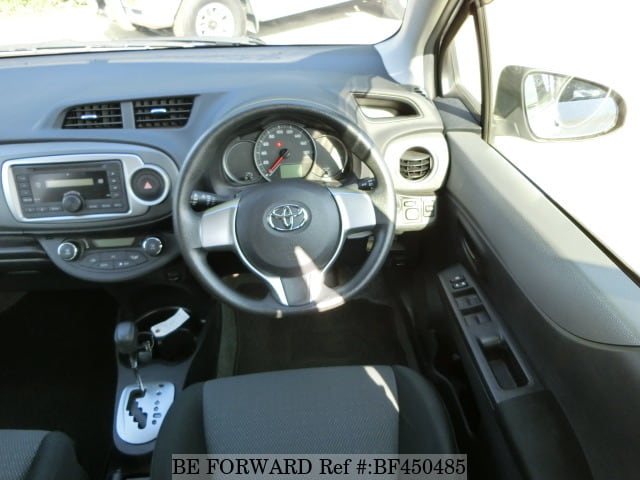 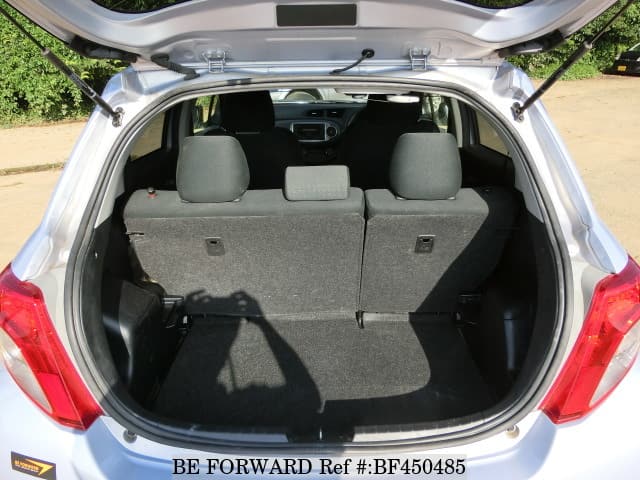 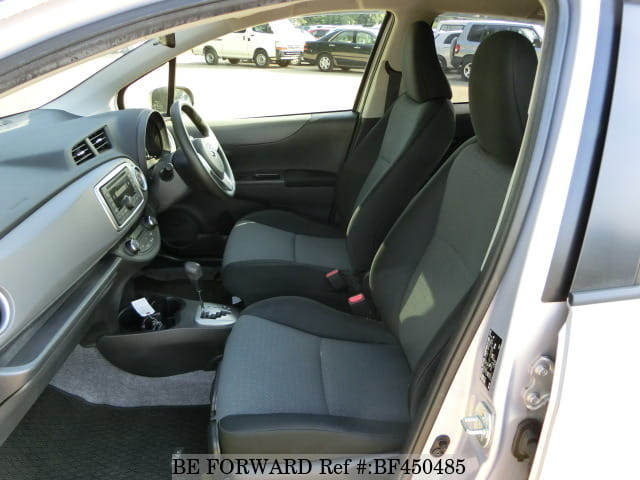 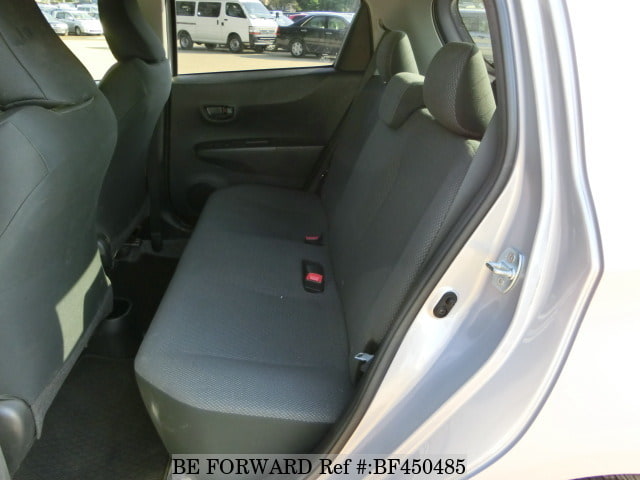 For many years the supermini car group could be summed up in one word: cheap. Cheaply made, cheaply designed, and cheaply constructed. Since its inception, the Toyota Vitz has been designed to change that perception. While the Vitz does feature a spartan interior, it is made from top quality materials and is designed to be driver accessible. The base models do offer adjustable seats that have improved covers when compared to the first generation. The centrist instrument panel immediately draws the drivers eyes, giving a feel of control that one may not find in other supermini offerings. The interior lines of the Vitz are simple and unpretentious, allowing the driver and passengers to concentrate on other things as they commute. 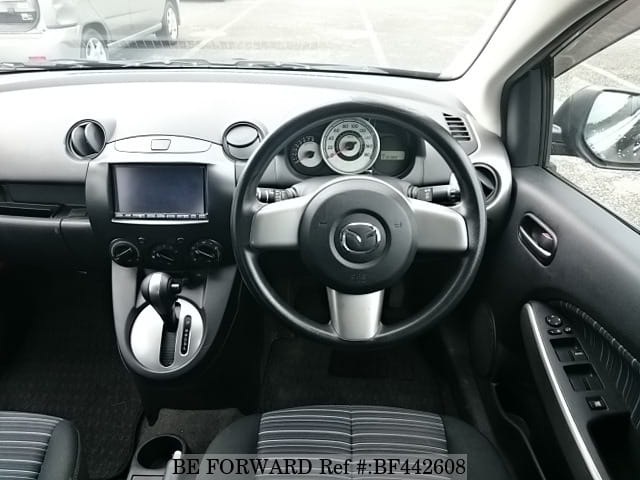 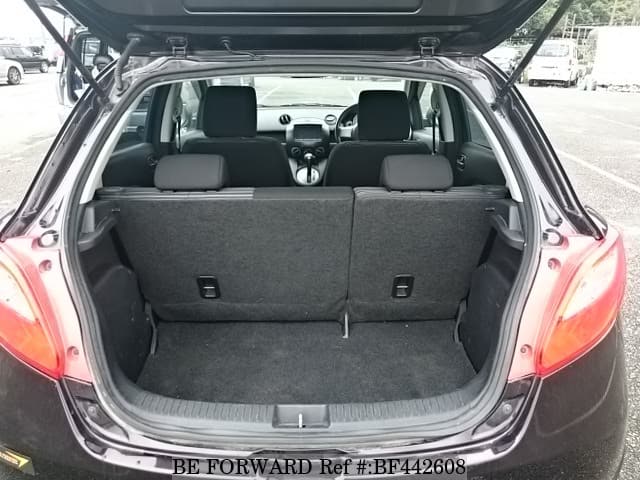 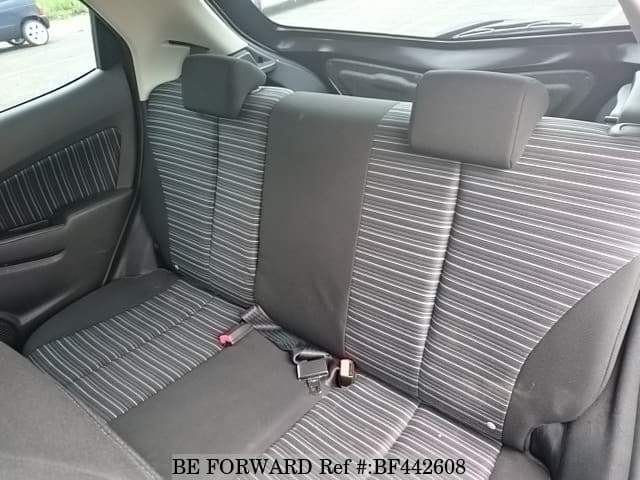 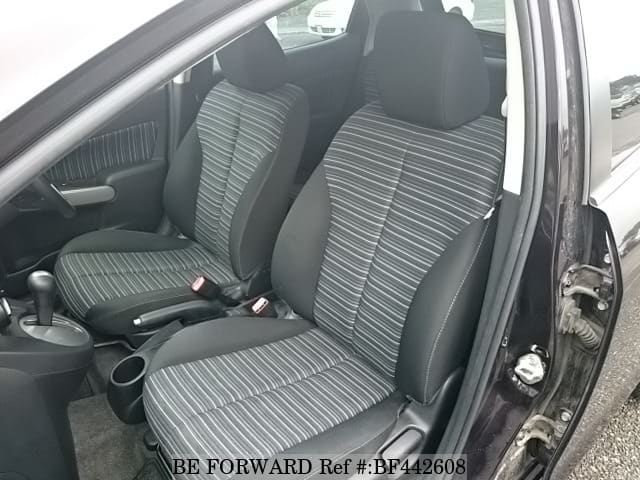 The first and second generations of the Demio were known for their cheap interiors. While the 2008 Mazda Demio continues to feature an interior that is a minimalists dream, it is far from cheap. Mazda has incorporated ample amounts of faux chrome and backlighting to give the interior of the third generation a modern feel that counteracts its minimalism. The shifter is aptly placed within convenient reach of the driver. The compact gauge cluster is front-and-center, never causing the eye to wonder from the road ahead, nor distracting the driver's concentration. The seats, while most commonly clothe covered, are sturdy and comfortable. The passenger space offers multiple storage areas. Even when upgraded with a navigation system, the interior of the Demio is spartan, yet functional in every detail, embodying a traditional fuel-sipper. 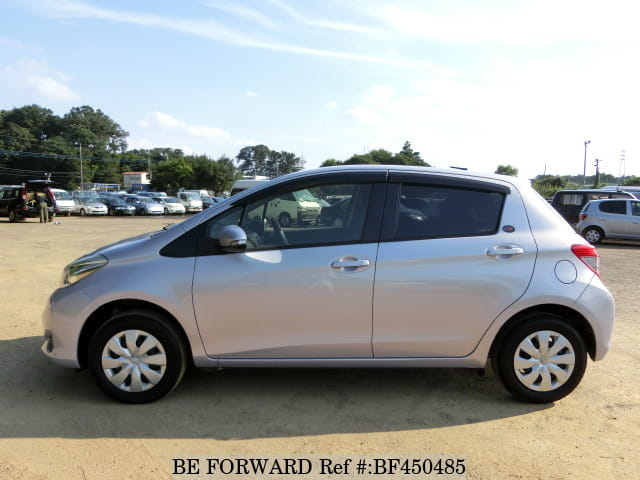 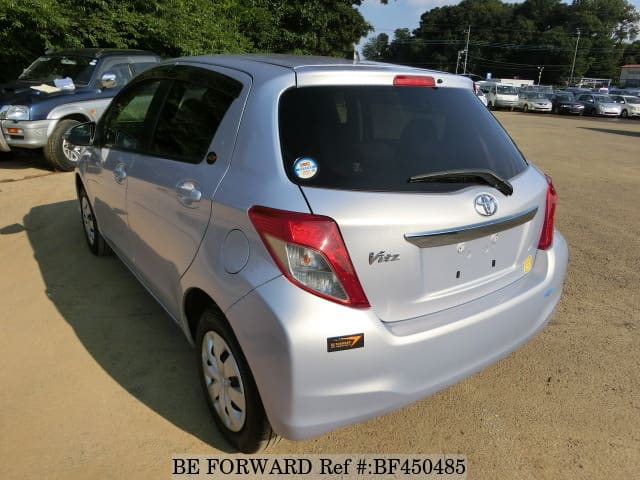 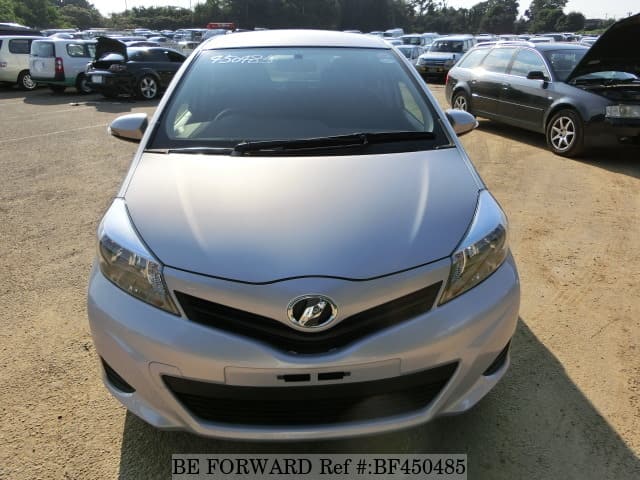 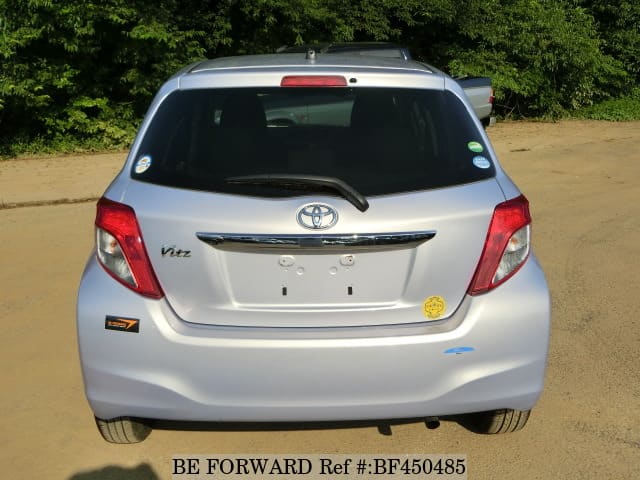 In its early incarnation, the Toyota Vitz could have been considered a bit clunky and blockish, opting for function over form. For the second generation, Toyota improved on the exterior by melding form and function. The result was a sleeker, more aerodynamically stellar body. The Vitz was given an aggressive stance and a slightly lifted rear to add to its curb appeal. All of the Vitz's dimensions were increased for the second generation. By 2008, the Vitz had a wheelbase that was 90 mm wider than the first generation. Additionally, the Vitz was 110 mm longer and 10 mm taller. In 2008, an additional 35 mm was added to its length. For 2008, the Vitz features teardrop headlamps and color-matching bumpers. The Toyota Vitz RS, Japan model code DBA-SCP90, features unique front and rear bumpers, a mesh grille, black-tinted headlamps, front fog lamps, side skirts, and larger alloy wheels when compared to other Vitz trim levels. 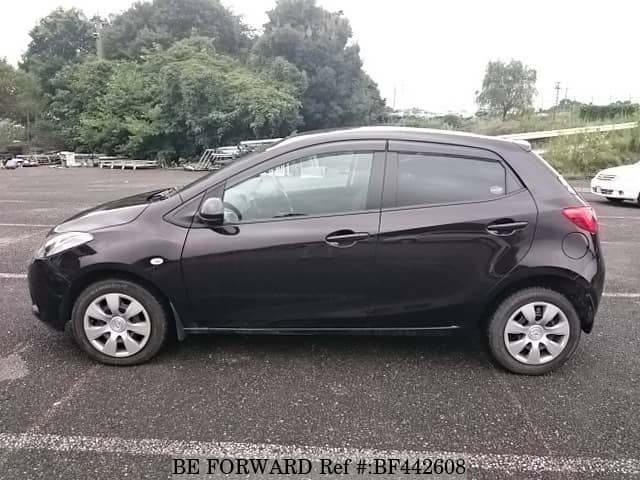 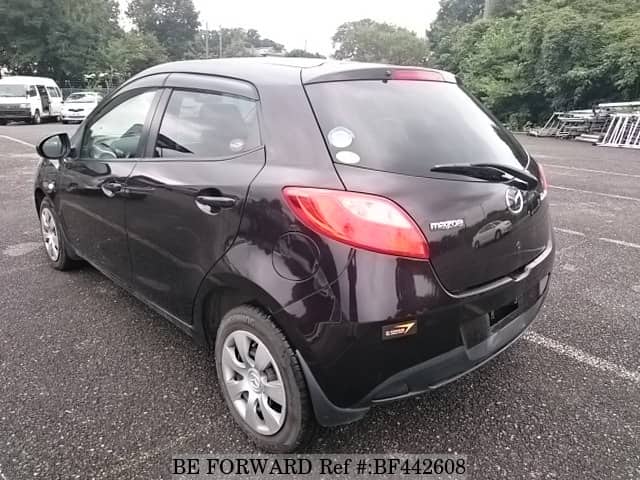 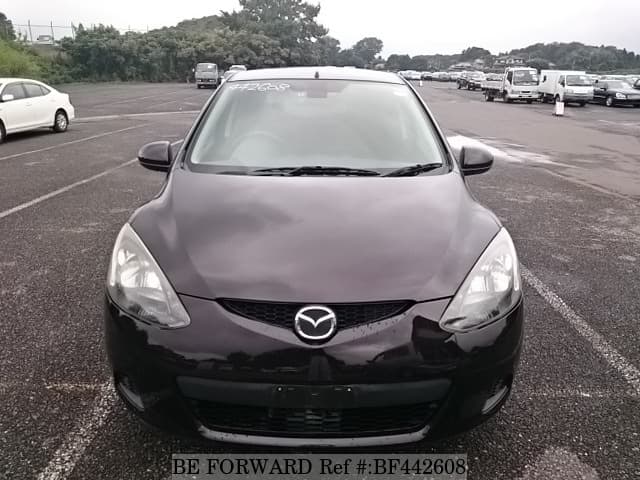 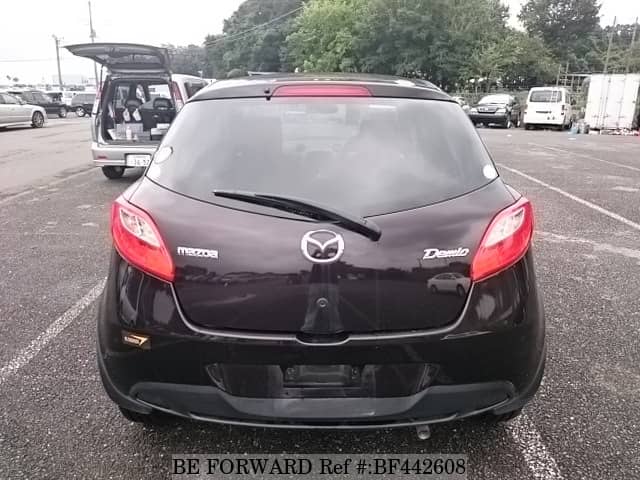 The 2008 Mazda Demio is built on the DE platform and won the World Car of the Year award, in part for its forward-leaning feral stance. As part of the third generation of the Demio, the 2008 is longer than previous generations, but is 113 kg lighter, improving on its fuel efficiency. Mazda achieved this weight loss in several ways; mainly by using more high-strength steel. Another issue the previous generations of the Demio faced was excessive road noise. While road noise is a common problem with inexpensive cars, the Mazda Demio suffered more than most. The automaker increased body-shell rigidity and improved the bushings used to minimize road noise. Additionally, Mazda placed more emphasis on a flowing form. The third generation of the Mazda Demio incorporates complicated lines along the sides and hood; giving it a sculpted look that will remind buyers of the RX-8. In the rear, the overhang has been reduced to give the Demio a tighter, sporty look.

The 2008 Toyota Vitz is a very fuel efficient car. The only Toyota product that is more efficient is the Prius. Most people equate such a petrol sipping car with a poor or, at the very best, mediocre driving experience. That is not true with the Toyota Vitz.

The 2008 Mazda Demio, known as the Mazda2 in non-Asian markets, is an intuitive, agile supermini that Mazda has poured its heart and soul into. Refusing to bend to the common mythos that an inexpensive fuel-sipper should be made inexpensively, Mazda has gone to great lengths to create a car that is as fun to drive as it is to look at.

Side-by-side, the 2008 Toyota Vitz and the 2008 Mazda Demio stack up quite well to each other. There are no glaring issues that shout ''avoid this car!'' The interior of each is well appointed for the supermini class, offering comfortable seating for four. Both offers class leading safety features and a driving experience that is unexpected, to say the least. The technology available in each is similar to what you would find in more expensive cars. The 2008 Toyota Vitz does come out ahead in cabin space and fuel efficiency, beating the Demio by a few km/l. The Vitz is also backed by Toyota's legendary durability. On the other hand, the engines featured in the 2008 Mazda Demio offer better acceleration and quicker pedal response than their Vitz counterparts.

Overall, the 2008 Toyota Vitz is the better vehicle if you are most interested in fuel efficiency or need the most cabin space possible. Likewise, the 2008 Mazda Demio is the perfect car for drivers who want above average fuel economy, but want responsive acceleration. While we do not wholeheartedly recommend one over the other, now you have the information you need to make a better informed decision when buying your next car.