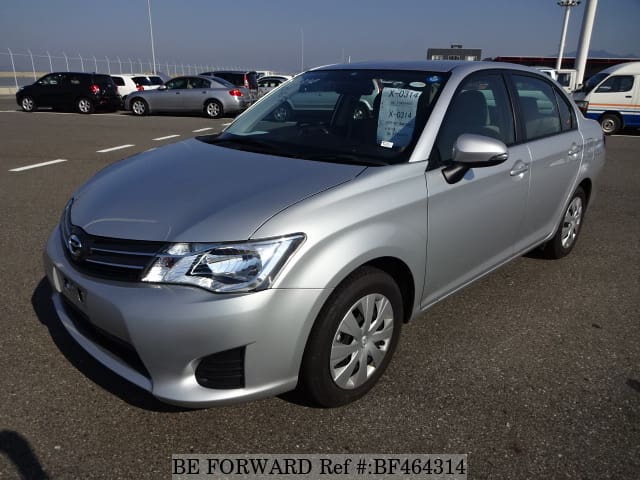 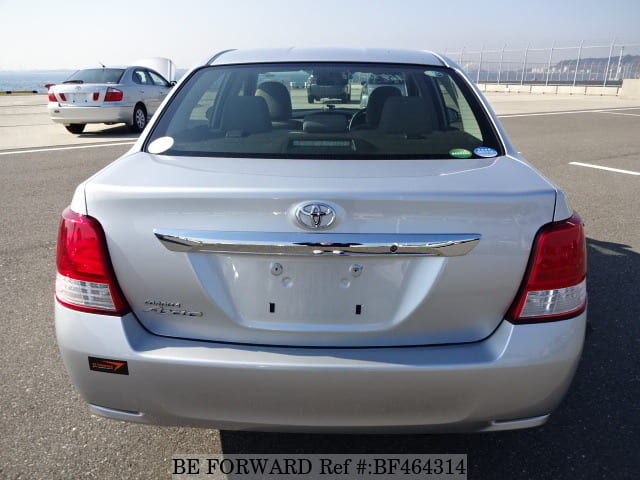 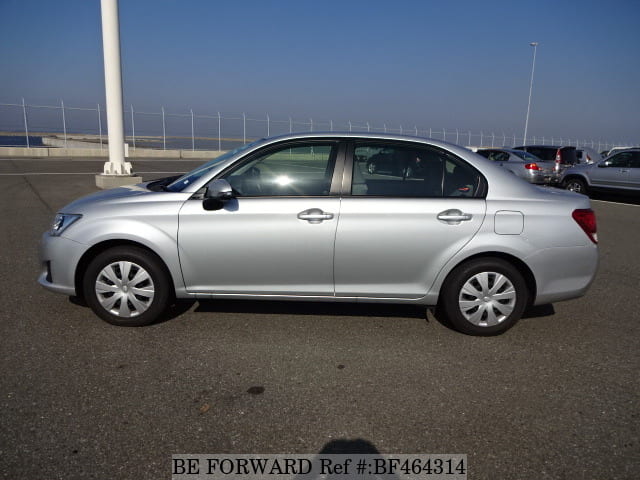 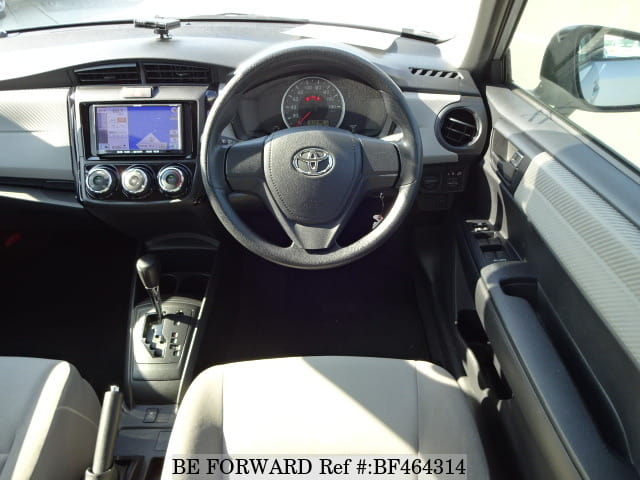 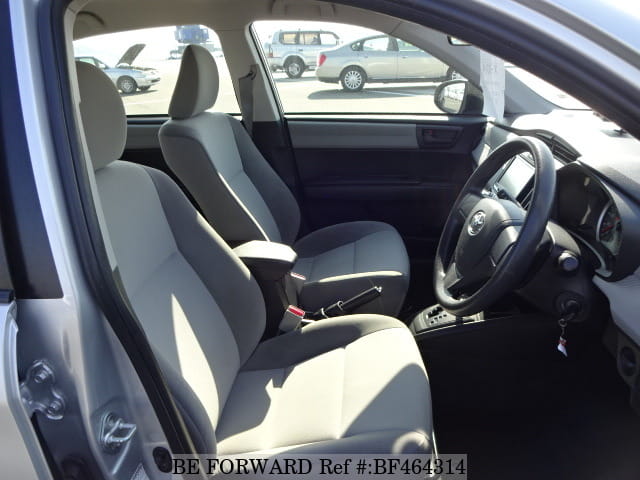 The Toyota Corolla sedan was introduced in 1966 to replace the Toyota Publica. By 1974, the Corolla nameplate had become the best-selling car across the globe. It has remained at, or near the top, in sales throughout the ensuing four decades. Due to the popularity of the Corolla, Toyota has been one of the best-selling automakers around the globe for many years, often bandying the top position with Chrysler Corp and the Volkswagen Group. The Toyota Corolla sedan incorporates many of the top selling points that drivers are looking for today: economy, reliability, and outstanding safety. With this winning combination, the Corolla looks to stand astride automobile sales for many years to come.

"Why do customers typically buy this vehicle? Because it has a long standing history of great reliability, affordability, and sensibility."

The BE FORWARD Car Expert Recommends The Toyota Corolla Sedan.

The BE FORWARD car expert gives the Toyota Corolla(Corolla Axio) sedan four out five stars in most categories. Our expert gives the Corolla sedan five stars for reliability and long term chassis performance. The Corolla appeals to every demographic in Japan, offering the room a small family needs as well as the eco-responsibility and affordable price point that is a requirement for today's younger generations.

The Toyota Corolla sedan began life as a subcompact alternative in 1966. It was introduced as a larger version of the Toyota Publica, which continued to be sold until 1978. The Corolla, designed to be an economic family car, introduced several innovations to the Japanese market as well as a new engine design. Riding a new wave of private automobile ownership, the Corolla quickly began to outsell all of its competitors, emerging as the best-selling car in the world by 1974. Through eleven generations, the Corolla has always been an outstanding car for reliability and economy. 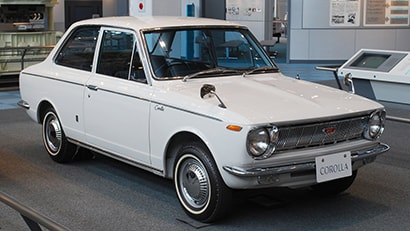 The first generation of the Toyota Corolla sedan, the E10 version, went on sale in Japan in November of 1966. It was sold exclusively through the Toyota Corolla Store. It was seen as an answer to the Datsun 1000 that had been available for several months. The earliest generations of the Corolla sedan were meant to fit into the subcompact category. As such, the E10 Corolla had a wheelbase of just 2286mm. The Corolla had a standard four-speed manual transmission or a two-speed automatic as an option. It was also rear-wheel driven. When the Corolla sedan was introduced, it featured a floor shift transmission; an oddity because floor-shift transmissions were thought to only be for use in trucks. At the time, there was an implication that a four-speed was needed because the car lacked enough torque. 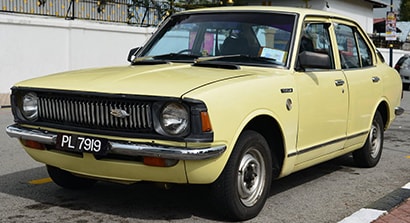 The second generation of the Toyota Corolla sedan was referred to by the chassis designation of E20. The E20 group was completely restyled to take advantage of the ''Coke-bottle style'' that was popular at the time. Coke bottle styling, like the soda bottles, features outward curving fenders and a narrow center, not when viewed top to bottom, but when seen in profile. The design lowered the air drag coefficient and allowed for improved fuel economy. The second generation had a slightly greater wheelbase as well as two new engine options: 1,400cc and a 1,600cc OVC engines were available. 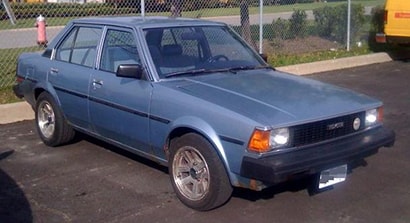 The fourth generation was given the E70 designation, reflecting the chassis designations reserved for the Toyota Sprinter that was using the same chassis at the time. The E70 generation was a squared off version when compared to the third generation. The K and T-series of engines were discontinued at the end of the third generation. Fuel injection became an option later in the E70 run. Daily production of the Toyota Corolla topped 2,300 units and the one millionth Corolla was produced in February of 1983, prompting Toyota to release a limited ''One Millionth'' edition in Japan only. 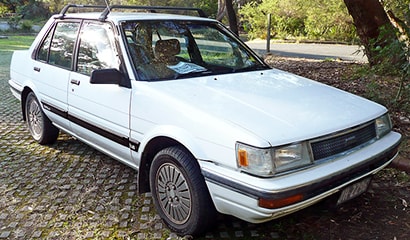 The E80 fifth generation Corolla followed a worldwide trend of sloping bonnets and clearly defined edges. The Corolla grew again, now having a wheelbase of 2,430 mm, but still falling into the subcompact category in most markets. The vast majority of Corollas were front-wheel drive, with the exception of the AE85 and AE86 sport coupes. The two-door sedan was eliminated, but the four-door sedan remained a strong selling model throughout the fifth generation.

The E90 Corolla took on a much sleeker, aerodynamic styling. The sixth generation eliminated rear-wheel drive completely, but did offer 4WD All-Trac in some models. In Japan, the sedan had two chassis sub-designations depending on the engine used. The EE90 was powered by a 1,295 cc engine and either a four-speed manual or three-speed automatic transmission. It was available in the DX, TX, and Custom trim levels. The AE91 sub-designation was powered by a 1,490cc engine that could be paired to either transmission, but was only available in the sedan wagon. Other engine variants were available, but not in the sedan that is being concentrated on in this article. 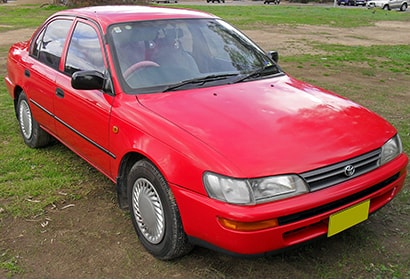 The E100 seventh generation of the Corolla became larger and heavier, moving from the subcompact class into the compact category in most markets. Despite its larger size, the E100 was much more aerodynamic, eliminating many of the sharp edges that had defined earlier generations the carburetor became a thing of the past with this generation; with Toyota opting for fuel injection much like the majority of automakers around the world. The seventh generation, developed by Dr. Akihiko Saito, was meant to be a ‘‘mini-Lexus.''

The eight generation of the Corolla sedan was given the AE110 (1.5 L) and AE111 (1.6 L) designations depending on he trim package. The eighth generation was nearly identical to the seventh due to a recession in Japan. By 1997, the recession had lifted and the Corolla was slightly restyled. The front-end and interior were only mildly refreshed, but the rear of the car was restyled to the point that parts are not interchangeable with pre-refresh versions. 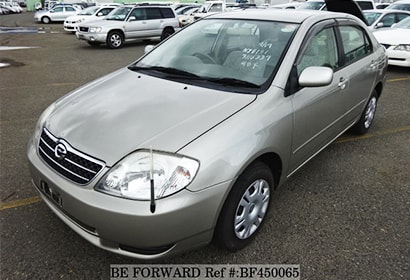 The E120 ninth generation of the Toyota Corolla brought a facelift and a refreshed engine lineup. In the Japanese market, the Corolla features a 2,600mm wheelbase and is built on a shortened Toyota Vista platform. The trim packages included the X Assista Package (Base), X, G, and Luxel, with a 4WD option added in 2003. (View models TA-NZE121(2WD, 1.5 L), TA-NZE124 (4WD, 1.5 L), CBA-ZZE122(2WD,Luxel model ) 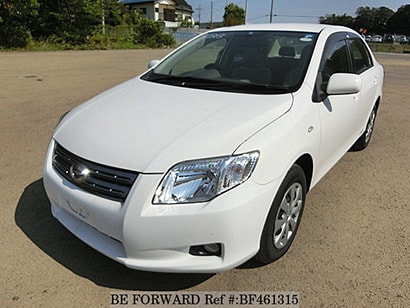 "The name change from Corolla Sedan to Corolla Axio came with Dual VVTI to improve engine efficiency from previous models."

The tenth generation of the Corolla was given the chassis designation E140-narrow and was dubbed the Corolla Axio in Japan. The Corolla Axio's dimensions were slightly smaller to meet Japanese governmental regulations. While it retained a 2,600mm wheelbase, the body was narrower and slightly shorter than the international model. 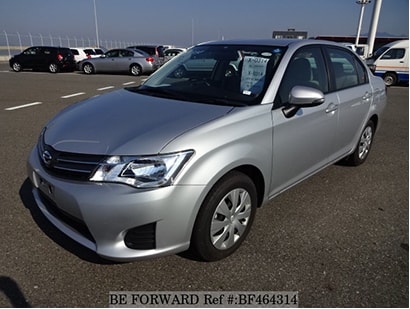